Press Release: The Start of the Birth of Planets in a Binary Star System Observed 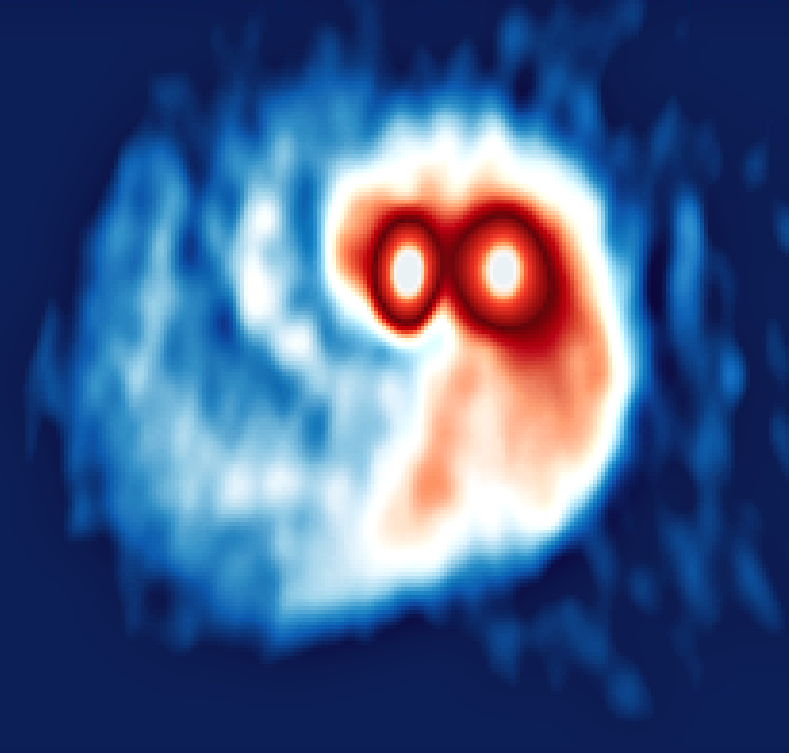 ALMA observations of dust in the disks around SVS13.  Credit: Ana Karla Díaz-Rodríguez and Guillem Anglada.

A group of astronomers led by Ana Karla Díaz-Rodríguez (affiliated with both the IAA-CSIC and the UK ALMA Regional Centre Node at The University of Manchester) have observed primordial material in the binary star system SVS 13 that could be beginning to form planets.

Using the Very Large Array (VLA) and the Atacama Large Millimeter/Submillimeter Array (ALMA), Díaz-Rodríguez and her team demonstrated that each protostar in this system is surrounded by its own disc of gas and dust, with a larger disc surrounding both stars.  These discs can provide the material that is needed to form planets either orbiting the individual stars or orbiting both stars together.  Additionally, multiple different molecules were detected in these gas discs, including complex organic molecules that could be the precursors of life.  As stated by Díaz-Rodríguez, "This means that when planets begin to form around these two suns, the building blocks of life will be there."

These results will be published in the Astrophysical Journal and are currently available from arXiv.  Press releases are available from both the University of Manchester and the IAA-CSIC (in both English and Spanish).

In April, Dr. Daniel Walker will be starting work as an ALMA Contact Scientist at the UK ALMA Regional Centre Node. Daniel obtained his PhD in 2017 from Liverpool John Moores University. From there he worked as an ALMA/NAOJ postdoctoral fellow at the Joint ALMA Observatory in Chile, and then as a postdoctoral research associate at the University of Connecticut. His primary research interest is star formation in the Milky Way's Central Molecular Zone (CMZ) and in particular the extent to which galactic environment regulates the process of star formation. He is leading several ALMA projects to study protostellar sources in the CMZ and is a member of the ALMA CMZ Exploration Survey (ACES) large program.

The North American ALMA Science Center will hold a webinar to discuss planned technical updates for ALMA in the next eight years, with a particular focus on new receiver capabilities. This will include a discussion of the Band 1 (8.6-6.0mm; 35-50 GHz) receivers currently being installed on the array, the Band 2 (4.5-3.3mm; 67-90 GHz) receivers that will be installed next, and an upgrade to Band 6 as part of the ALMA2030 Wideband Sensitivity Upgrade.

To attend the webinar, register at the website beforehand.

Following the Cycle 9 Call for Proposals, the European ALMA Regional Centre will be holding a virtual community assembly. Updates will be provided on the current observing cycle (Cycle 8) and the upcoming one (Cycle 9), following which time will be available to ask questions. The meeting will be accessible via Microsoft Teams via this link.

On 24 March, the Cycle 9 Call for Proposals will go out. This will include the release of the Cycle 9 Observing Tool (used to prepare observing proposals) and the opening of the archive for proposal submissions. More details are currently available from the ALMA Cycle 9 Pre-Announcement.