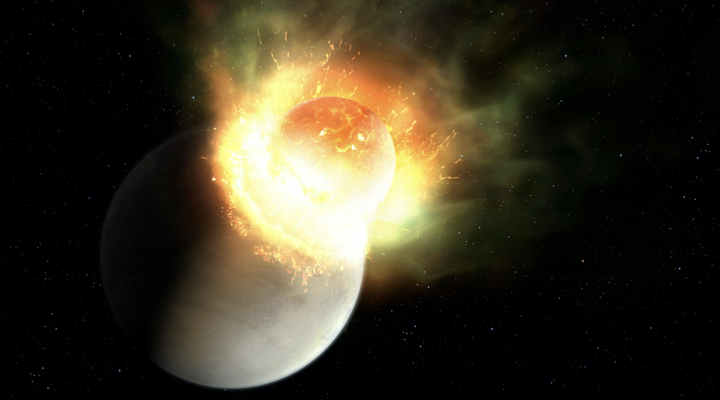 An artist's depiction of the planetary impact in the HD 17255 star system. Credit: Mark A. Garlick.

A group of astronomers including researchers from MIT, the National University of Ireland at Galway, and the University of Cambridge have, using ALMA, found evidence of a giant impact between two planets in the star system HD 172555. Previously, a large amount of dust had been spotted in the system, but in this new analysis, astronomers identified the presence of large amounts of carbon monoxide in orbit at a distance of 10 AU from the star. After rejecting other hypotheses, the team determined that most plausible explanation for the origin of the molecular gas is that it came from a giant impact 200000 years ago between two protoplanetary objects comparable to the Earth in size.

The results of this research have been published in Nature. Press releases can be found on the MIT website and the Institute of Astronomy website.

The UK ALMA Regional Centre Node is currently gauging interesting in offering a hybrid (in-person and online) workshop in early 2022. This will provide an introduction to ALMA and will cover such topics as proposal preparation, working with the ALMA archive, calibrating and imaging ALMA data.

Anyone who is potentially interested to participate can fill in this poll by 15 November. The schedule for the workshop will be finalized after that date.

Before the end of the year, the European ARC Network will be conducting two more online training sessions as part of the I-TRAIN series:

More information un the upcoming sessions as well as archived presentations and videos from previous sessions can be found on the ESO I-TRAIN website.